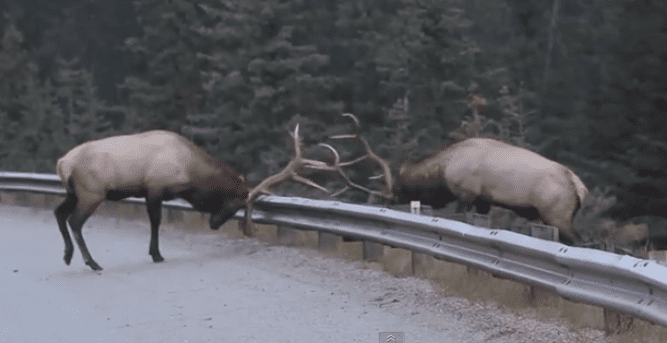 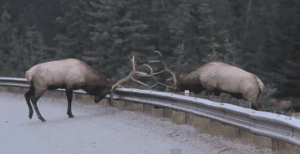 “Nothing worth having comes without some kind of fight.”
– Bruce Cockburn

These beautiful animals are bringing the heat over the highway guardrail, used as their ‘natural’ boundary. It’s a tough sale — pushing another stout male out of the prized territory. But every year, the challenges begin again, in earnest. Young males, experienced bulls, newcomers and old guards — all fight for the new positions, to demonstrate their superiority and take command of the newly formed heard / harem,

Every year, the males fight to protect, or to add new numbers to their harem. These fights are either to the death or the defeated bull will leave that territory, having been run off by the victorious elk.

There’s lots of great video out there, showing these monstrous animals clashing in the heat of battle, often with glorious mountains visible in the background.

Life often comes in unusual, unexpected scenes. This showdown is in an unusual place — the battlements of their castles are used highway guardrail panel and posts standing on the roadside. How many of our penetrating memories come from things, words, expereinces, and feelings that landed on us in unique or unusual places? I love watching life unfold in places like this — because the mystical mountain passes just feel like this actually feel like they can explode with a territorial battle, or a thousand birds bursting into song, or an indescribable sunset — at any minute.

It’s further proof that real life genuinely happens in unusual and unexpected places as we see here in this clashing scene caught on video — showing us once more that life does go down, often in the most unusual of places. I think that’s what makes it more like life in the long run.

Check out a few more life and death scenes, (most of these not involving the used highway guardrail as the referee).